Or: these things aren’t as strong as I thought they were.

Today has been stressful. It was the first day back at work today and this afternoon Becky was wandering around the office making sarcastic comments about bullying and how it “wouldn’t be the first time” she’d been accused of it. I didn’t hear the context that led to her being in such a conversation, but her remarks were obviously aimed at me because I made it clear on one occasion in the past that I considered her a bully. I should have opened the pack of fruit pastilles in my bag and had one at that point, because that’s what my counsellor and I discussed – when she does these things, reward myself with sugar. Reframe it. But I totally forgot about their existence until later, and instead I escaped to the toilets.

How to prove you’re not a bully: Make sarcastic comments belittling someone else’s feelings over something they said a year ago.

I did email my boss regarding salary/promotion. He had sent an email before I got in saying he wouldn’t be in until the afternoon, so I hesitated, thinking “do I want to be waiting all morning for a meeting?”, but I pressed ahead anyway and sent it first thing.

The final email went like this:
Paragraph 1: Recent achievements, observation that I’m functioning well above the role I was hired for 7 years ago
Paragraph 2: Recent complimentary comments from him and HR lady
Paragraph 3: Say “it is therefore hard to understand” why my achievements aren’t being recognised professionally and my salary has fallen behind its market value
Paragraph 4: Close by saying I hope the company will resolve this “confusing inconsistency”.

I read it back later just before I left and I was pleased that it was diplomatic while also pinning it down tightly. There’s no real wiggle room; any resistance will devalue the words in paragraph 2. A valuable tip I’ve picked up from my counsellor is when someone’s “words and actions don’t align” (a phrase of hers), the way to draw attention to this is to focus on the confusion it causes.

He then decided he wouldn’t be in the office after all today. Coincidence? Who knows.

I am anticipating resistance. I expect him to tell me that the company’s not doing well and the currency is causing us additional expenses, because I’ve heard all this before. I’m not sure where this goes if he chooses this route, because the job ad I saw yesterday for an assistant role advertised a generous salary higher than mine, and the exchange rate argument is unsupported by the actual exchange rate.

I very much hope that he doesn’t put me in a position where I have to find a way to diplomatically call him dishonest, but if he does I’ll throw in the facts (job ad and exchange rate data) and again express my “confusion”. But at that point the negotiation will have taken a sour turn so let’s hope he doesn’t lead it down that path.

Overall I have found today quite difficult and I am not sure if the citalopram has really helped much.

My watch’s interpretation of my stress level today is pretty bad: 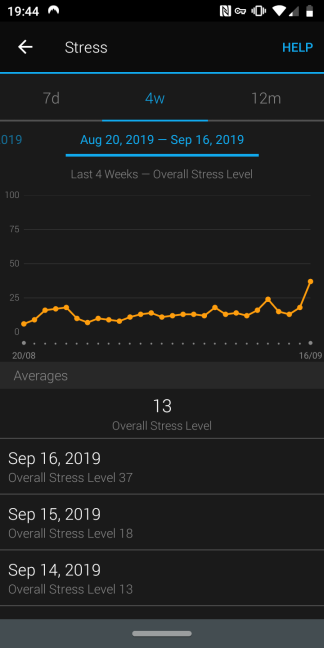 My sleep last night was dreadful – I slept from 10:00PM – 1:00AM then woke up and only started dozing at about 3:00AM, with frequent waking up for the rest of the night.

View all posts by e.v.